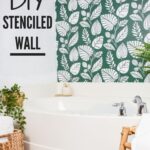 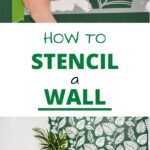 Learn how to stencil a wall with paint in this simple step-by-step tutorial. Wall stencils are the perfect wallpaper alternative!

I’m so excited to be working with Stencil Revolution to bring you this fun indoor project. All opinions are my own.

I’ve never really touched my master bathroom, aside from a coat of paint when we first moved in. There’s a good reason you’ve never seen it before now. It’s big, but very boring and builder-grade. I’ve been eyeing the bathtub alcove for years, thinking it would be the perfect spot for a fun accent wall.

How to Stencil a Wall

To tell you the truth, I’ve done a lot of stencil projects, and accent walls too. But I’ve always steered clear of stenciling a whole wall because I was worried it would take FOREVER!

But when I saw these giant wall stencils from Stencil Revolution, I knew this would be much much easier! And it totally was. The hardest part about this project was choosing just one from their selection of gorgeous modern wall stencils! Alright, let’s get started.

At this point I’ve done A LOT of stenciling, and I like to think I’ve learned a a few things along the way. When I’m looking at wall stencils (or any other kind of stencil), I generally try to choose a pattern that’s not ridiculously intricate (i.e. lots of tiny details).

Stenciling can drive a perfectionist insane. Unless you want to spend an entire week stenciling a single wall, you’ll need to accept that the final product won’t be perfect.

Or you can go for a mottled worn look with colors that have less contrast, and not worry about it. Either way, when you stand back and look at the whole wall, those tiny details won’t stand out, and the big picture will look amazing!

Here’s a list of all my favorite wall stencil patterns available online.

I used a 1 ½” angled brush to cut in around the edges, then used a mini roller, since this isn’t a large area. I did two coats of the green paint. Give the paint at least 24 hours to dry before you begin stenciling.

I started in the upper right corner of the wall, taping the stencil into the very corner. It took several pieces of tape to hold it in place.

My preferred stenciling method is a stencil brush, even for large areas like this. I tried using a roller for this project, but I was much happier with the results I got from the brush. It leaves much cleaner lines that require less touch-up work later.

Pour a small puddle of paint onto a paper plate. Holding your stencil brush straight up and down, lightly dip it into the paint.

Then swirl the brush on a dry portion of the paper plate to remove some of the paint.

Next, bring the brush perpendicular to the wall and use a “dab dab dab” motion to apply the paint. Refill your brush as often as needed, but be sure to swirl the brush each time, so as not to get too much at once. If you get too much paint, it will seep under the stencil and mess up your design.

When you’ve filled in all the cut-outs in the stencil with paint, very carefully remove it from the wall by peeling it from one side to the other. You can let the paint dry a bit first, but I prefer to remove the stencil while the paint is still wet. It makes cleaning the stencil much easier!

Now carefully take the stencil and lay it in a bathtub, shower, or utility sink. I used a green scrubbie sponge to remove the paint. This step is important because if you allow paint to build up on your stencil it will not perform well next time you use it. Rinse the stencil, and dry it with an old towel.

Once your previous stencil work is dry to the touch, you can re-apply the stencil. This particular stencil overlaps, so the pattern will continue perfectly.

When you’re done stenciling, you’ll likely need to touch up some of the lines. I like to use a small artist’s brush for this. I also needed to fill in a few spots where the pattern didn’t quite extend all the way to the corners of the wall.

I’m really happy with how this wall turned out…and I’m so excited to have a quiet space all to myself to relax!

How to Paint a Mural: An Inexpensive Wallpaper Alternative 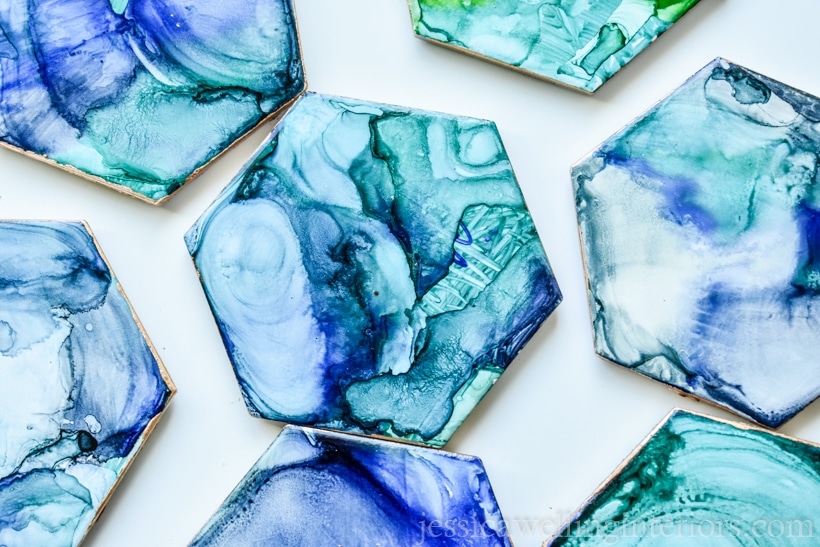 Create gorgeous DIY coasters using Sharpies and alcohol! It’s an easy project for kids and grown-ups alike! Learn how with this simple tutorial. A friend and I were asked to come up with an art project for B’s second-grade class to make for the school auction. I wanted it to be something cool and useful…… 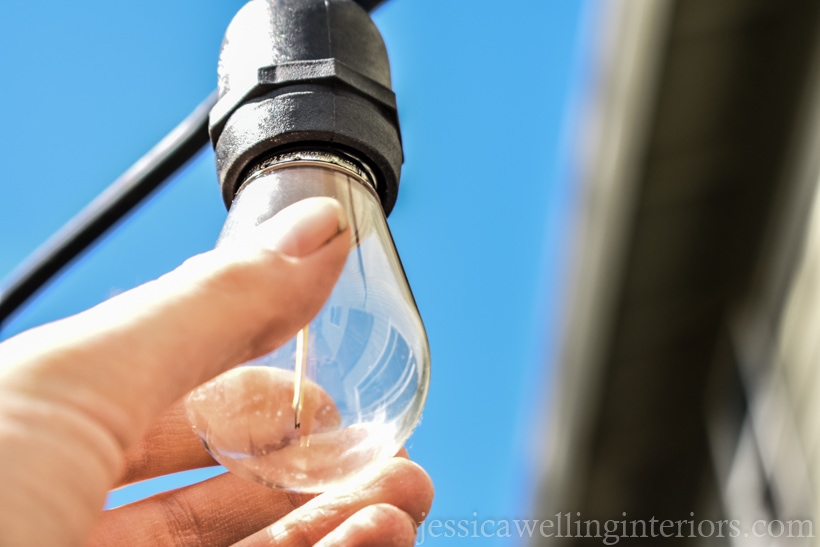 Learn how to hang outdoor string lights over your deck, patio, or backyard with this comprehensive guide. Who doesn’t love a backyard party under glowing string lights on a warm Summer’s evening? But figuring out how and where to hang the lights, which type to buy, and how many you need can get a little… 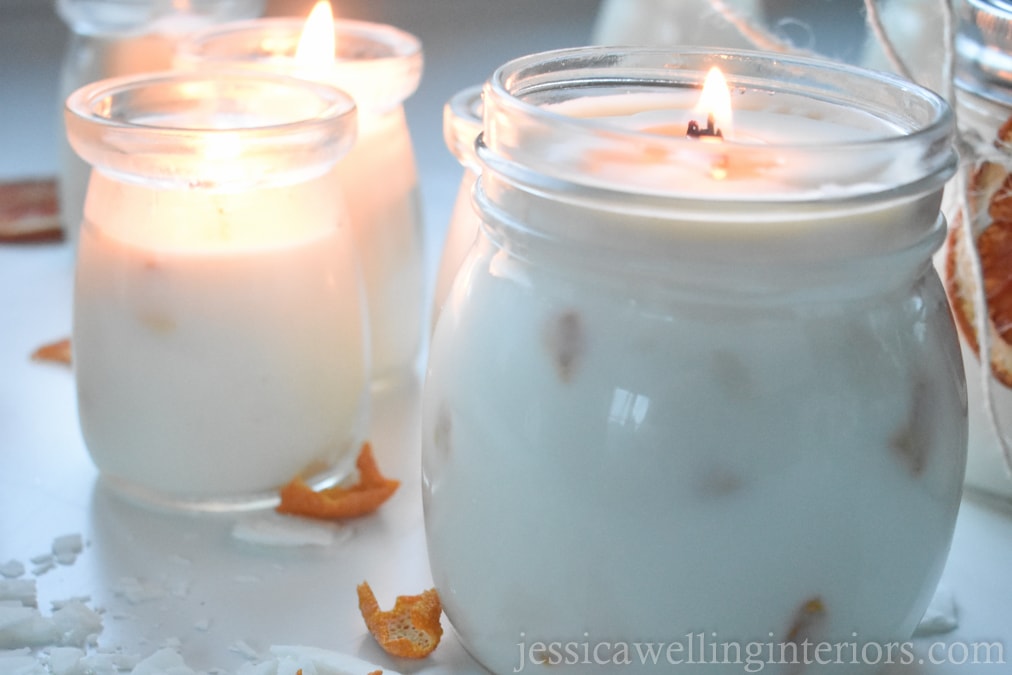 Learn how to make soy candles with this simple step-by-step tutorial. These natural handmade candles make perfect gifts! Natural soy candles are the perfect handmade gifts! When I first started researching natural candles, I quickly learned that candle-making is a little trickier than I had imagined. What’s more, every guide and tutorial I found recommended… 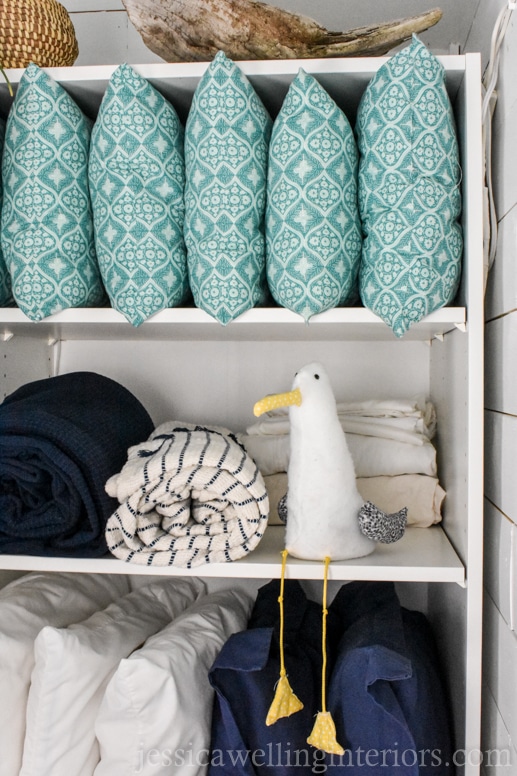 This DIY beach house bunk room has 6 space-saving bunk beds, Ikea storage hacks, ladders, and beach decor, it’s perfect for vacation sleepovers! We’ve been trying to decide what to do with this awkward tiled room off the garage at my folks’ beach house for a few years. And once most of the grandkids got… 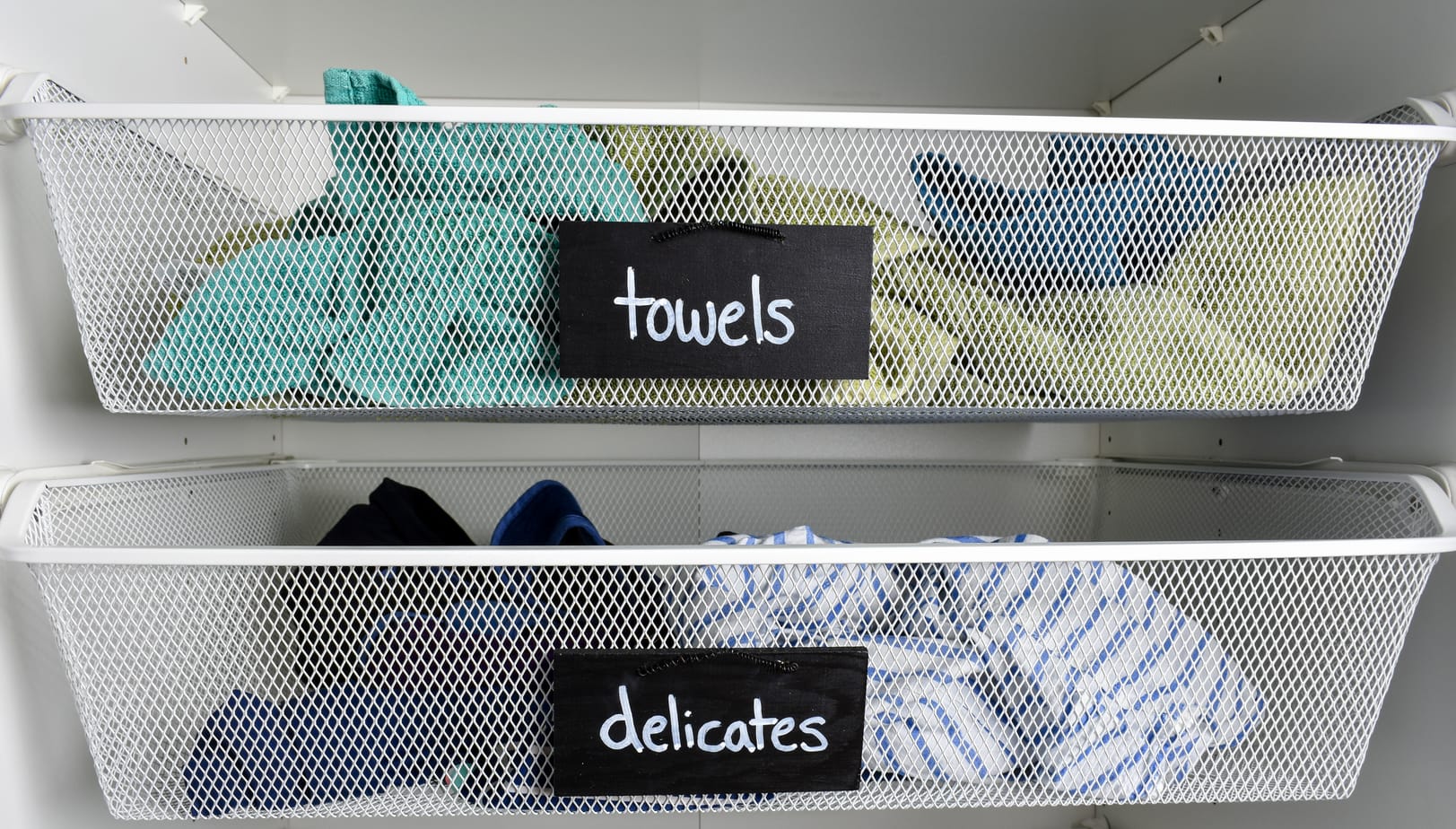 I recently re-organized my pantry, and we did a laundry room renovation a few months ago. I needed mini signs to finish up both projects, and these painted chalkboard labels were just the thing! I’ve tried a few different types of labels in my pantry, but none of them have stuck for very long. That’s… 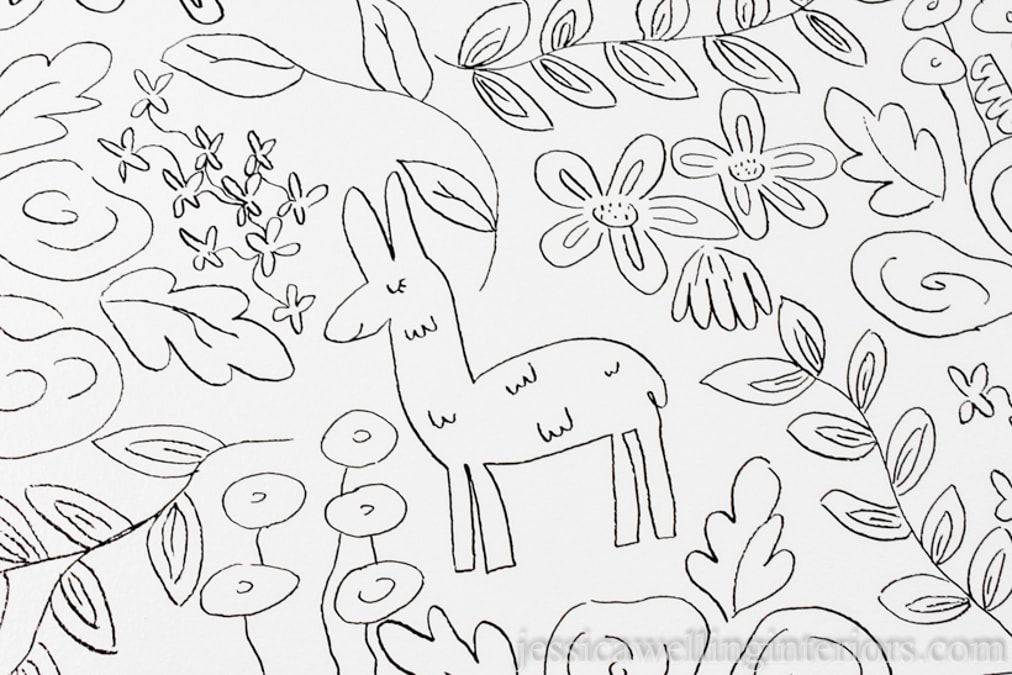 Looking for inexpensive DIY wall design ideas? Make a statement with an easy DIY mural by drawing on the wall! Learn how in this simple tutorial! The little ladies and I have been working on re-designing their bedroom. They’re getting bunk beds and the thrill is real! I wanted to use wallpaper on one wall….